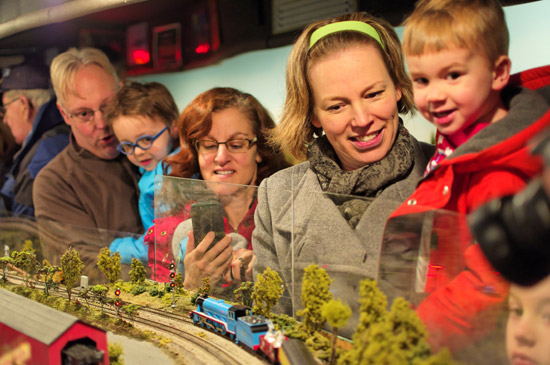 Every year, the Garden State Model Railway Club holds an Open House for the enjoyment of the public. Unlike some clubs, this event is geared for both hobbyists and families. Not only will you see prototypical trains such as modern intermodal trains, coal drags, general freights, and passenger equipment, you will see our famous Santa Claus Express with various Disney and other pop culture characters for the children, not to mention Santa and his sleigh! This train has been popular with children since we first ran it back in 1993. These trains are pulled along the Garden State Northern mainline by a wide variety of steam and diesel locomotives. In 2001, the Club introduced Thomas the Tank Engine and his two coaches Annie and Claribel, another huge success. In 2002, Hogwart’s Express from the movie Harry Potter ran along the GSN mainline. In 2002, the Club also began running the ICE Train, brought home from Germany by one of its members. As the Club’s Digital Command Control system evolved, more of the locomotives in service began to produce realistic sounds and additional trains were able to be run simultaneously. In 2008, the ICE Train was replaced with an Amtrak Turboliner that whizzes down the mainline.

In addition to the Santa Claus Express and Thomas, a platform and even higher grandstand can be found in the room for the young children to view the trains from. We also have a working signal from the CNJ’s Cranford Junction on the premises. Everyone has fun switching its colors. In 2001, as an experiment, a small switching pike was utilized for children to operate. One of our members was kind enough to supply an old engine, which took a beating against the old Atlas bumping posts! Needless to say, the children had a blast with that.

In 2012, the Club opened for two weekends in March. It was so successful that it was planned again for April 2013. What also turned out to be a very successful experiment was opening for the first weekend of January in 2013 after the November and December shows. The Club continues these new traditions today. In 2016, the Club opened up its newly acquired space next door, bringing back its CNJ signal display, two small layouts for children to operate, and equipment for sale.

As always, an assortment of REFRESHMENTS will be sold. Be sure to take advantage of our GRANDSTAND for young children to view the trains from! In addition to passenger and freight trains found on the prototype, we will be running our famous SANTA CLAUS EXPRESS (Nov-Dec-Jan Only). Also touring the Garden State Northern will be THOMAS THE TANK ENGINE!