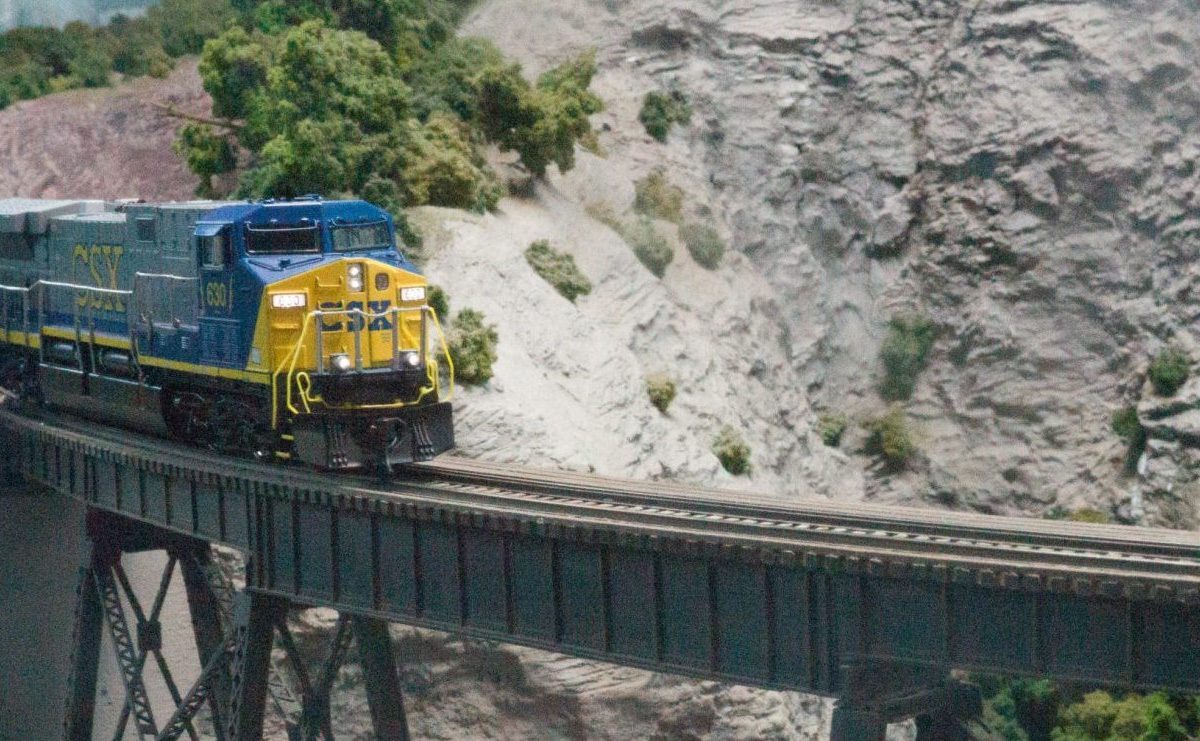 From its humble origins in a garage in Paterson in the early 1950s, the Garden State Model Railway Club has established itself as a leader in HO model railroading in the Northeast. The Club’s history of creativity and innovation in building and operating model railroads has been attracting serious hobbyists for decades, as well as the parents and children who throng to its Open Houses. Now, the Club has entered a new phase of growth, attracting new younger members, and it has set ambitious expansion plans for what will be two permanent layouts at its North Jersey headquarters.

The GSMRRC currently operates the Garden State Northern, an HO-scale railroad with over four scale-miles of track, at its home at 575 High Mountain Road in North Haledon, NJ. The existing layout has been revised and improved on an ongoing basis for almost three decades. It recreates the location and operations of the railroads of North Jersey during the transition era of the 1950s, with accurate depictions of industrial operations and urban and rural scenery.

Notable features of the layout include a recreation of the Central Railroad of New Jersey passenger terminal, now part of Liberty State Park on the Hudson River, and Albatross Yard, the central operating hub of the line. For hobbyists, the standout feature of the Garden State Northern is a deep gorge and railroad viaduct modeled after the Central of New Jersey High Bridge. Every Christmas and spring hundreds of parents and children from around the re- gion crowd into the Club to watch the Garden State Northern in operation.

Now in its seventh decade, the Club and its more than 50 members are em- barking on their most ambitious project ever: planning and building a second 2,500-square-foot layout in recently acquired space next door to the original layout. The new multi-level layout, currently under construction will continue to draw inspiration from the railroads of North Jersey, as well as include features of the Lehigh Valley and Pocono regions of Pennsylvania.
But before we look further ahead, let’s step back in time, to the Club’s early days.

1952—The Founding of the Garden State Model Railway Club The Club was formed in December 1952 as an offshoot of the Fair Lawn Model Railroad Club, which at the time was located in the basement of a store, Hobby Haven, on Route 4 in Fair Lawn. In January 1953, the Club held its first meeting in a rented two-car garage at 124 East Eighteenth Street in Paterson. Two former members of the Fair Lawn Club, Rene Flory, and Frank Thorwester, brought together the original members for their first meeting, and the newly formed GSMRR Club took its first step on a long journey. In addition to Flory and Thorwester, the first members included Mitchell Altis, Robert Diaz Sr., John (Jake) Oberer, Frank Ciganek, Robert Conklin, and Tom Geissler. Initially a pot-bellied stove provided heat, and the club agreed to re-roof the building in return for three-months free rent. The initiation fee was $10.00 and dues were $3.50 per month. The rent was $20.00 per month and the members supplied their own heat and electricity. The Club soon began the construction of what was then considered the largest HO scale railroad in New Jersey.

From the outset, the members agreed that the GSMRRC would be a social organization in addition to a club dedicated to the preservation and expansion of both model railroads and railroading. Their goal was to tie the bonds of friendship between members through social activities, education, understanding, and espirit de corps. These ideas have sustained the club through lean years and good times alike and remain a core value to the club and its members today.

1957—Settling in a New Home in North Haledon After three prosperous years, the membership had grown to seventeen and quickly outgrew the garage. The Club found a new location in its present home in North Haledon in a then brand-new building next door to the Model Engineers Railroad Club of North Jersey, an O gauge club with a long history of success. Finally settled in its new home, the Garden State Model Railroad Club was incorporated in the state of New Jersey in April of 1957. The ten original charter members who signed the certificate of incorporation were founders Robert Diaz, John Oberer, Frank Ciganek, Tom Geissler, Charles Johnson, David Palmer, Austin Pelzer, [Otello … and William Van Der ….needs verification.]

1960-1985: Steady Growth, and then a Plateau The Club continued to grow and thrive for decades, including a spurt of creative in the 1980s. In 1982, as the Club celebrated its 25th Anniversary in North Haledon, the members undertook the first major reconstruction project, including replacing and rearranging much of the trackwork and upgrading old wiring to state-of-the-art electronics. One of the two peninsulas was essentially rebuilt. But as the decade grew to a close however, disagreements among the membership caused neglect of the original layout to the point that is was almost inoperable. Membership dwindled to just five active members, and the Club even lost its incorporation.
The remaining members decided that to renew the Club’s mission and save it from extinction, they would build a new railroad. So after the 1991 Open House, the members came back from their Christmas break with plans for a new layout in the New Year, the Club’s 35th Anniversary in North Haledon.

2016-2018—Designing a New Layout with an Eye on the Past The new layout will represent the operations of railroads in northern New Jersey and northeastern Pennsylvania. Starting at the Hudson River in Jersey City, the line run will west through New Jersey suburban towns and the Pocono Mountains to reach Scranton, with a secondary route serving the ce- ment industries of the Lehigh Valley. The plan draws inspiration from well known railroads of the region like the Lackawanna, Jersey Central, and Lehigh & New England, although towns and industries will represent the region rather than duplicate what once was there. The multi-level design will provide a long mainline and permit prototypical operations, with the bottom level storing trains, while the middle and upper levels will have full scenery for viewing and operations. The new railroad will be opened in stages. Currently, a portion between staging loops is operational. A work in progress, the club anticipates completing the first level by the end of 2019.

2019 and on A New Beginning In its seventh decade, the Club is thriving year-round with operating sessions, Open Houses in December and the spring and the challenge of constructing a new second layout. With strong interest in the new layout from local model- ers, the membership recently surpassed 50 full, junior and associate members, with many younger members. The Club also continues to play a role in the local community holding sessions for local scout groups in addition to Open Houses.
At the start of 2019, long-time president Jack Oliver stepped down and passed the baton to Ron Bassani. Two younger members Greg Rycharski and Ryan Schmelzer stepped into officer roles, while Bob Savino continued as treasurer to round out the executive committee. With new blood and a new mission, the Garden State Model Railway Club is positioned for many more decades of model railroading. And consistent with its original purpose, the Club and its activities continue to serve as a social hub for members as it did at its founding in 1952.

Club Demographics 2019 With a growing member roster and increasingly popular open houses, the Garden State Model Railway Club is proud to represent a cross-section of model railroad hobbyists from around the region. We span the full range of
ages from 12 to over 80, and we cover the region from the western edge of New Jersey on up into the Hudson Valley.
• Full Members: As of the end of the first quarter, we have 23 full members, including 3 who have been granted lifetime member status.
• Junior members: Young people being the future of the Club, we now have nine junior members under 18.
• Millenials and Younger: Almost a third of our members are in their 30s, 20s or teens.
• Longevity:
• 21 members have belonged to the Club for at least five years
• 10 have been members at least 10 years.
• 9 have been members at least 20 years.
Geographic Reach: Our geographic reach covers Passaic, Bergen, Essex, Morris and Sussex Counties in New Jersey and extends as far as Ulster and Duchess Counties in New York State.
Finally, our open houses attract families from New York City, Long Island and eastern Pennsylvania as well as all over New Jersey and upstate New York